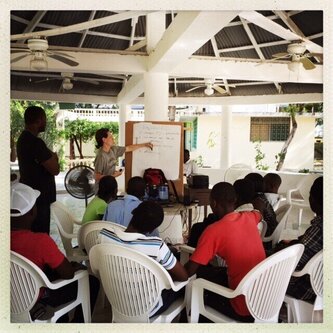 Brooke is a longtime HIV advocate and educator. She is an honors graduate of the University of Pennsylvania, earned a masters in journalism from Northwestern University, did advanced graduate work at Harvard University, holds a specialization certificate in Business Strategy from the University of Virginia Darden School of Business, and studied literature and photography at the University of Oxford. But Brooke has learned the most from local leaders she has met around the world. Brooke has used the arts to teach kids life skills for more than 20 years. She has worked as an HIV/AIDS advocate for the GMHC in New York and Fenway Community Health in Boston. And Brooke invented RemoteID, the award-winning, patented biometric tool TRIAD uses in the field to manage programming monitoring and evaluation. She is the founder and CEO of Remote Harbor, which has increased secure access to health and social services to more than 40 million vulnerable individuals around the world using RemoteID and the ShareWhere platforms. 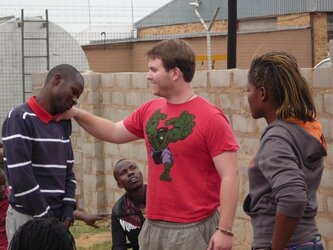 Jack is an actor and arts educator. He is a graduate of the Harvard Graduate School of Education and NYU's Tisch School of the Arts and Phillips Academy Andover. Before joining TRIAD, he spent five months developing drama programs with children in post-Katrina New Orleans. Jack helps local leaders create their own HIV education programs through TRIAD's innovative ImprovED program, which engages youth in the discussion about health decision-making. 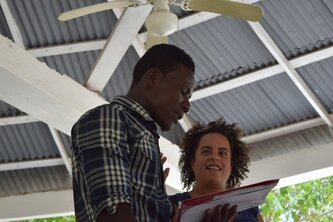 Marika is an acclaimed musician, composer, and educator. She has worked with TRIAD since 2008, helping to lead the trainings of every ImprovED troupe. Marika holds degrees in political science from Barnard College and cello performance from the Juilliard School. She teaches ImprovED facilitators how to write songs, craft foundational scenes, and find their fearlessness. In addition to releasing a fistful of her own solo and collaborative albums, Marika produced the Nkomazi ImprovED troupe's critically-acclaimed album, "Marula's Shade." When not on the ground with TRIAD, Marika has performed and toured with everyone from Adele to Jay-Z, and Yo-Yo Ma to Whitney Houston. 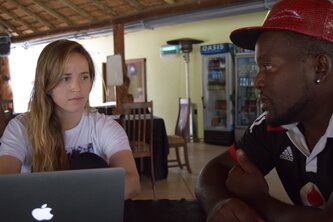 Caitlin is a graduate of Amherst College, where she starred on the soccer team and majored in Psychology. She earned her Masters in Teaching at Fordham University. She is currently pursuing her MBA at the MIT Sloan School of Management. A Teach for America alum, she taught early elementary grades at Harlem Prep Charter School before joining TRIAD full-time in 2015. Caitlin couples her love of soccer with her belief in the importance of after-school programs by coaching the America SCORES soccer and writing after-school program in East Boston. She has been integral in TRIAD's expansion into Haiti and has been boots-on-the-ground working to scale the impact of ImprovED and TRIAD's other training programs. 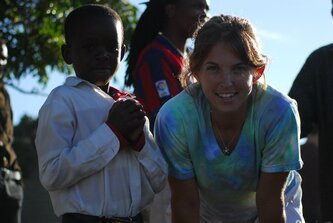 Lea is a graduate of Stanford University, having earned her degree in Human Biology with a concentration in Epidemiology, and her MD at the University of Arizona Medical School. Lea completed a fellowship in radiology at Duke University School of Medicine. She is an interventional radiologist. While at Stanford, Lea was a starting forward for the Women's Soccer Team. As TRIAD's Director of Health Education, Lea trains and certifies local health experts in our Health Education Curriculum, and helps to oversee the field-based monitoring and evaluation. 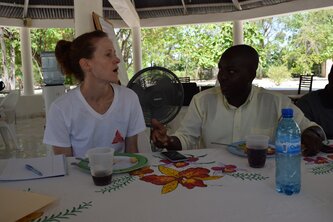 Kelly Jarvis, PhD, Director of Research & EvaluationA developmental psychologist by training, Dr. Jarvis's expertise is in bridging the gap between science and service. With more than 20 years of experience conducting applied research and evaluation with health and human service programs, she helps organizations collect and use data to inform and improve their services, all with an eye toward building capacity and supporting sustainability. She holds a PhD in Psychology and Social Behavior from the University of California, Irvine, earned an BA from the University of Pennsylvania, and brings experience in social service and education to her research endeavors. Kelly oversees the monitoring and evaluation of anonymous program beneficiary data aggregated by RemoteID to help inform programming with the goal of improving HIV testing and counseling services in the community, at large. She works with TRIAD in the US and on the ground around the world.